This blog post is an illustrated guide to regex and aims to provide a gentle introduction for people who never have fiddled with regex, want to, but are kind of intimidated by the whole thing.

In other words, welcome to … 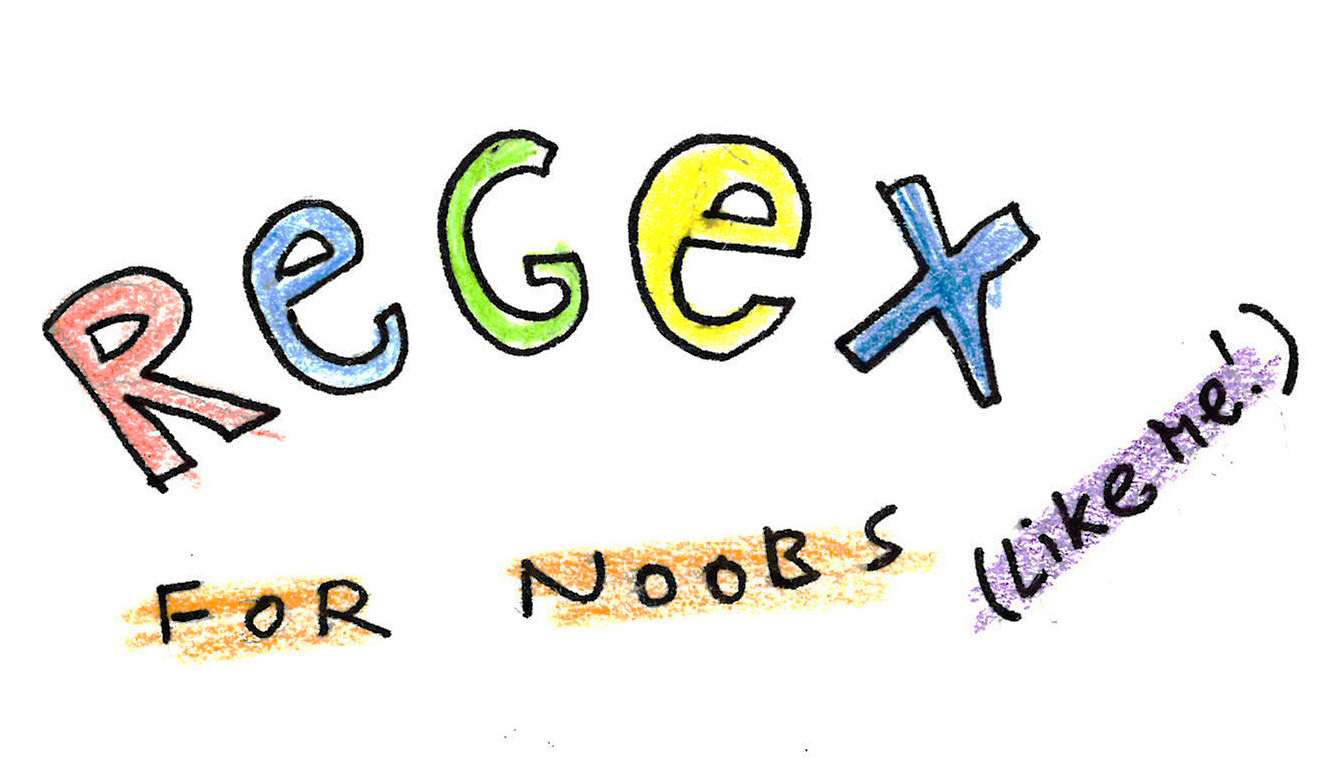 For most people without a formal CS education, regular expressions (regex) can come off as something that only the most hardcore unix programmers would dare to touch.

A good regex can seem like magic, but remember this: any technology sufficiently advanced enough is indistinguishable from magic. So, let’s peel away at the magic of regex and see what’s underneath!

If you understand regex it suddenly becomes this super fast and powerful tool … but you first need to understand it, and honestly I find it a bit intimidating for newcomers!

Let’s start with the basics. What are regular expressions (regex) and what are they used for?

At its core, a regular expression is a sequence of characters defining a search pattern.

Regex is often used in tools like grep to find patterns in longer strings of text.

If we use the regex cat to search for matches we find the following matches.

(Note for the hardcore powerusers: In this post I’m going to conflate the terms regex and the tools that use regex such as grep. This is technically wrong, I am aware of this.)

Regex works on characters, not words

One important thing that can not be emphasized enough is this: regex works on characters, not words. Concatenation is implied. 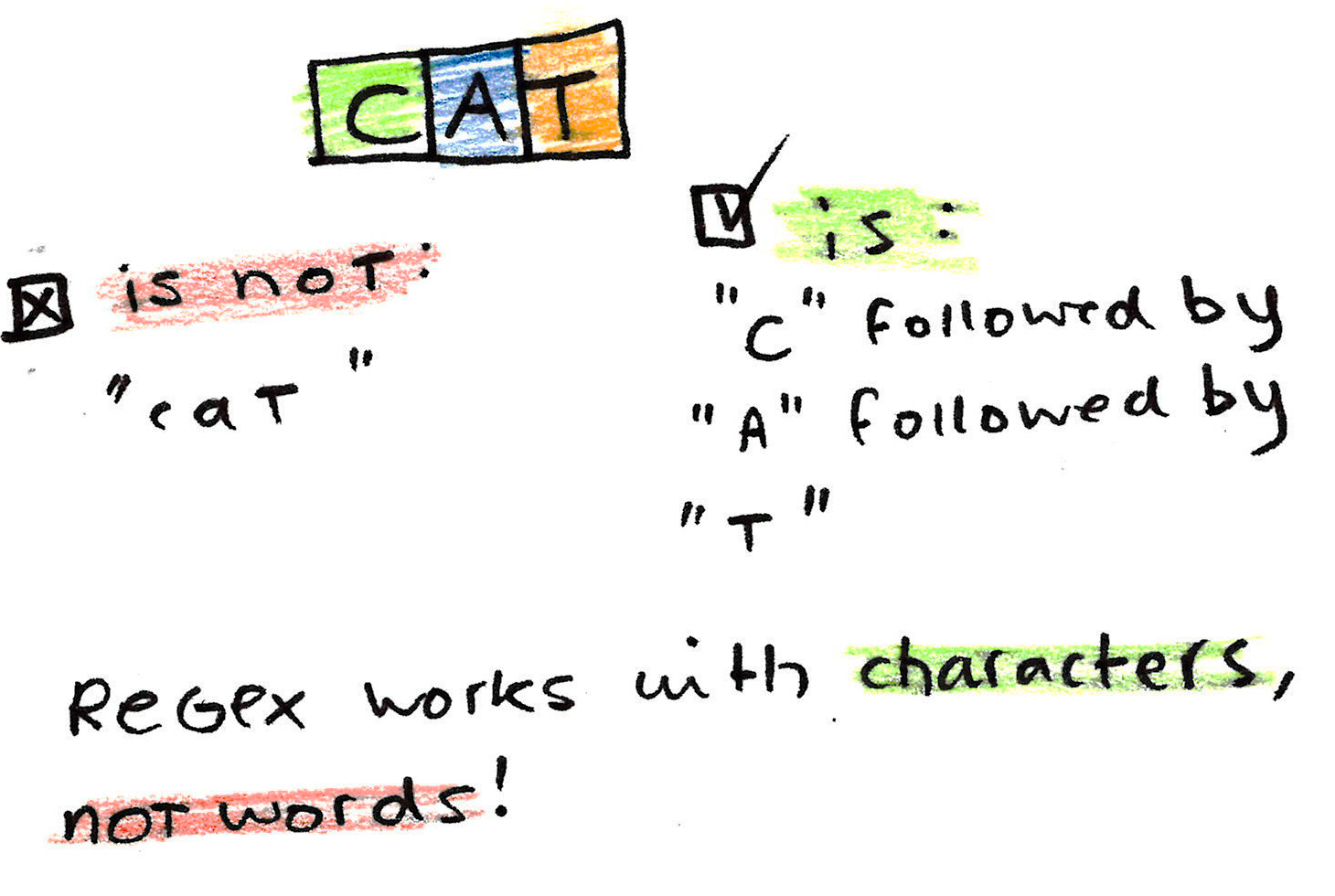 The dot and the asterisk

The most basic characters are the single characters, like a, b, c, etc. Now let’s introduce two special guests.

The cat ate my homework

Imagine we read in a file line by line and the first line is as follows.

Let’s look at how we would match the pattern cat in this line. 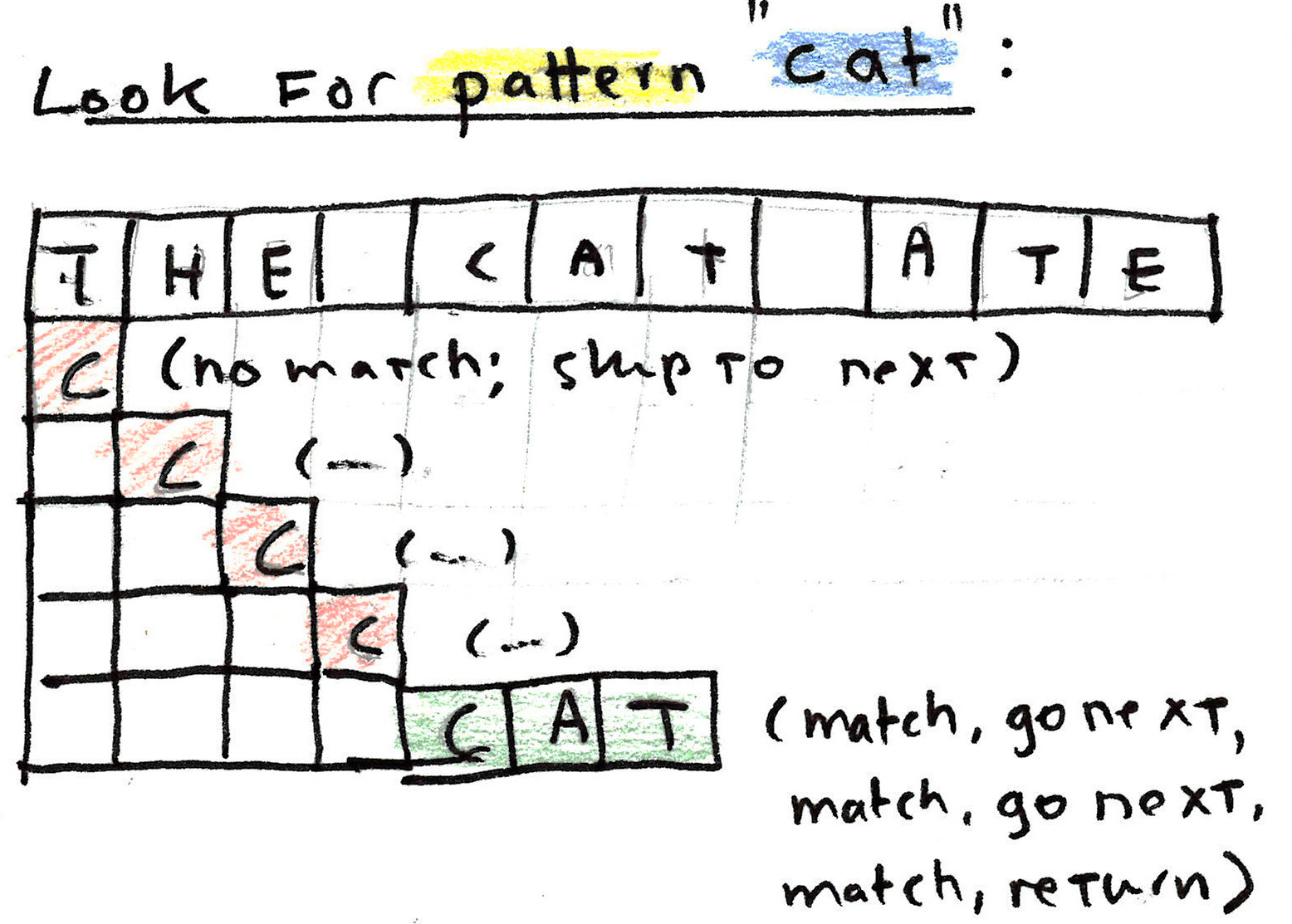 If we don’t find a match we skip to the next character in the line and start from the first character of the pattern.

That’s it! That’s what regex is most often used for at its most basic level, to find a smaller search pattern in a larger string.

So far we’ve gone over what regex is and two of the special characters, the . (dot) and the * (asterisk), but wait, there’s more.

Zooming out a little bit, the parts of a regex can consist of three different components:

These three make up the … regex trifecta! 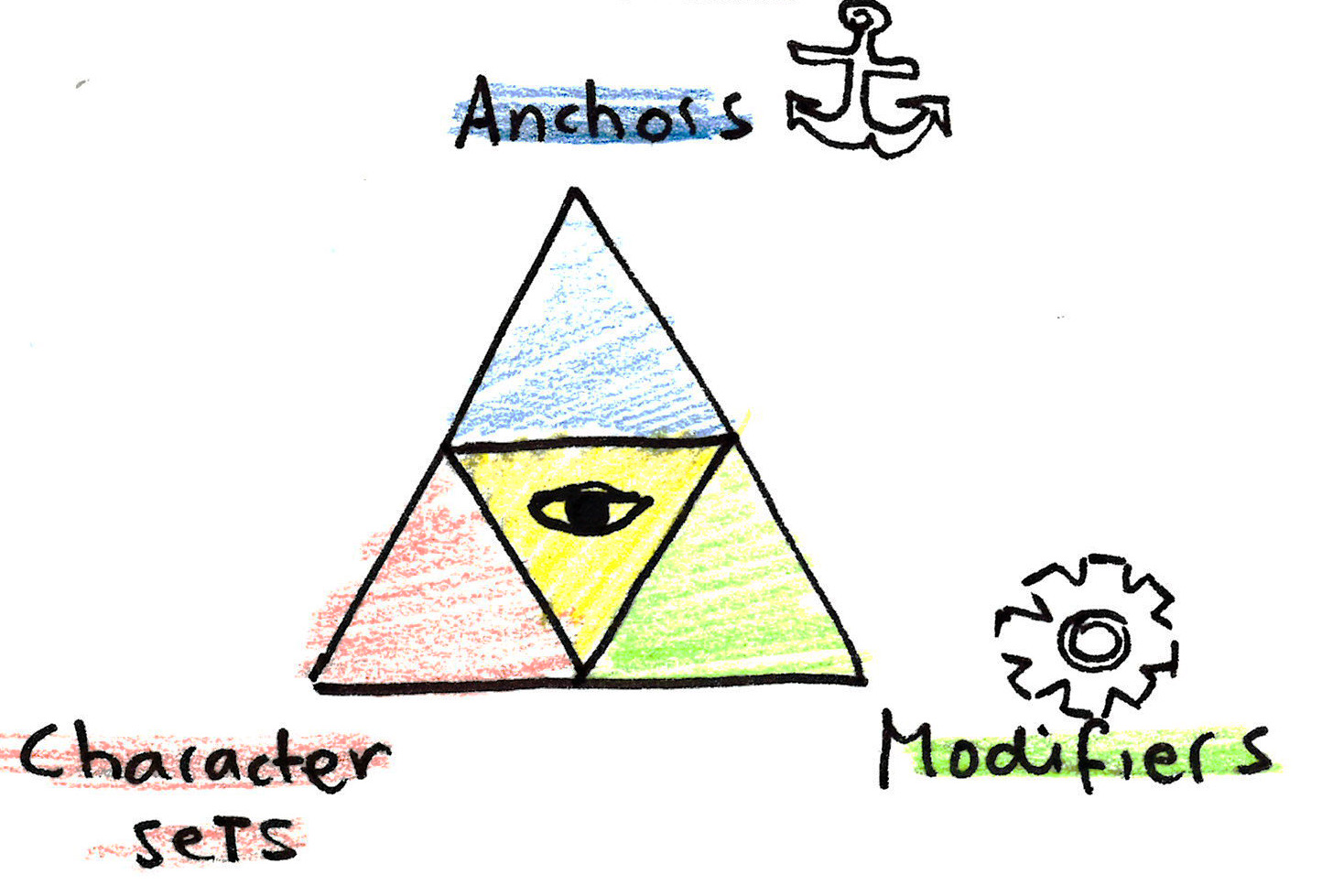 Let’s start with the first part of the trifecta: anchors! 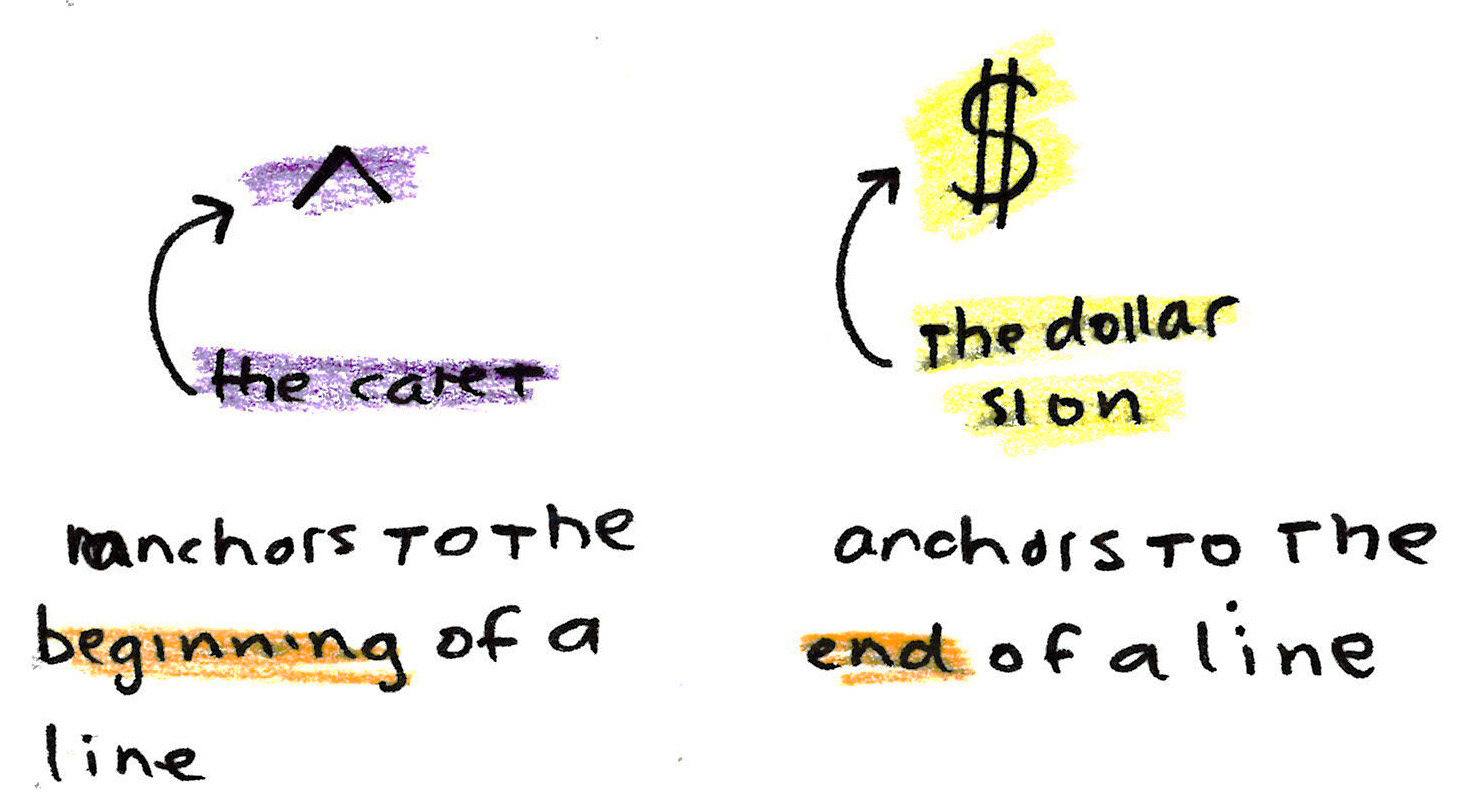 Anchors specify the position of the pattern with respect to the line. These are the two most important anchors:

On to the second part of the trifecta: character sets! 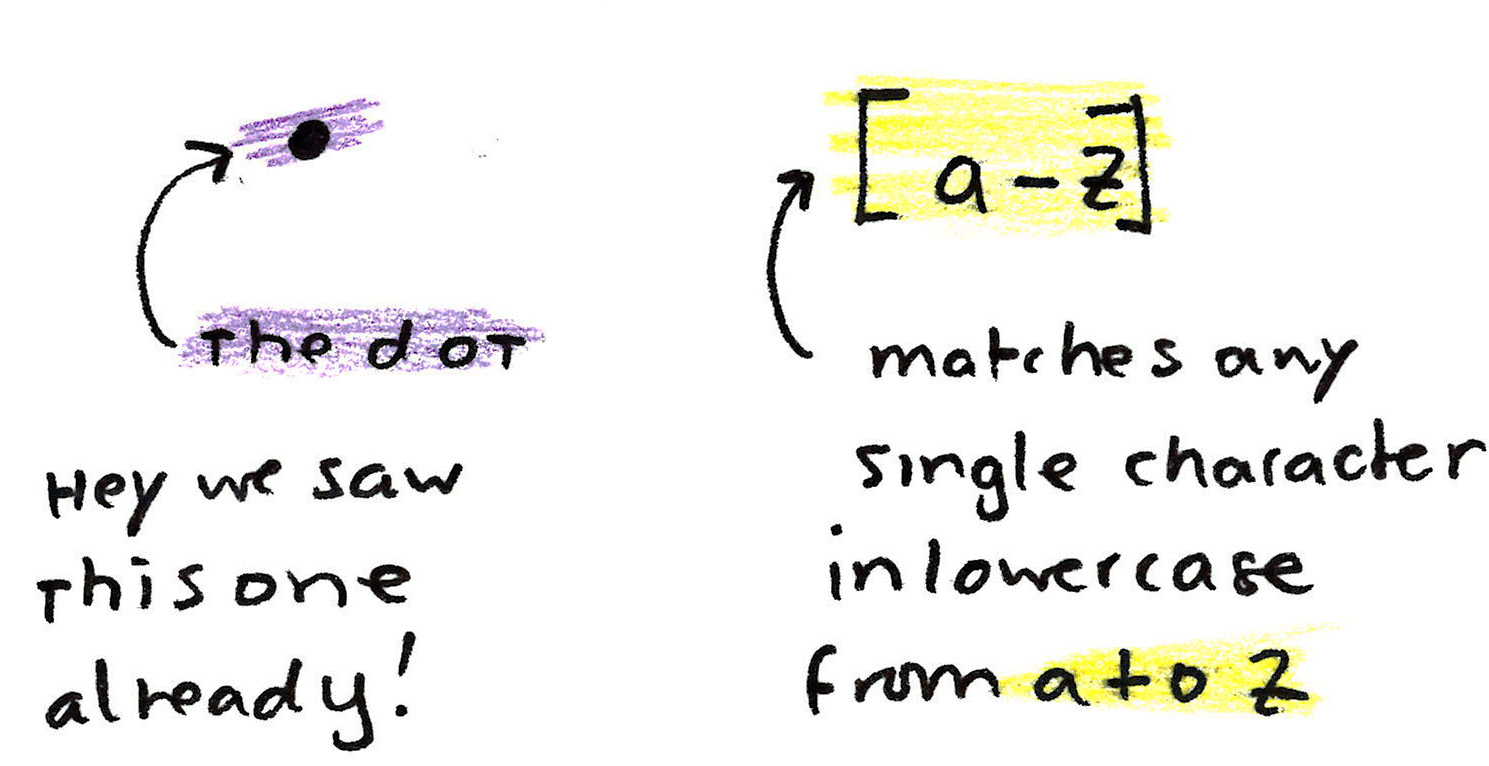 The second part of the trifecta: character sets. Character sets are the bread and butter of regex. A single character, say a, is the most atomic character set (a set of one element). But we can do crazy stuff with regex like [0-9] which matches any single digit, or if you recall what * does we can make the pattern [0-9][0-9]* (what this pattern matches is left as an exercise to the reader).

Some other important character sets:

We can also combine multiple sets:

I don’t want to get too much into depth here, but we already came across a modifier! The * (asterisk) is a modifier. A modifier changes the meaning of the character preceding it. There are many other modifiers but starting with * is a good start.

Let’s quickly dump some text in a file

This is what’s in the file now

The goal of this blog post was to make regex a bit more approachable by means of an illustrated introduction.

If you peel away at the technical difficulties what you end up with is a relatively simple but super powerful tool that will prove invaluable in any data scientists’ toolbelt.

There can only be two reasons why you are procrastinating

According to legendary management guru Andy Grove, there can only be two reasons why you’re procrastinating. In High Output Management, he writes: 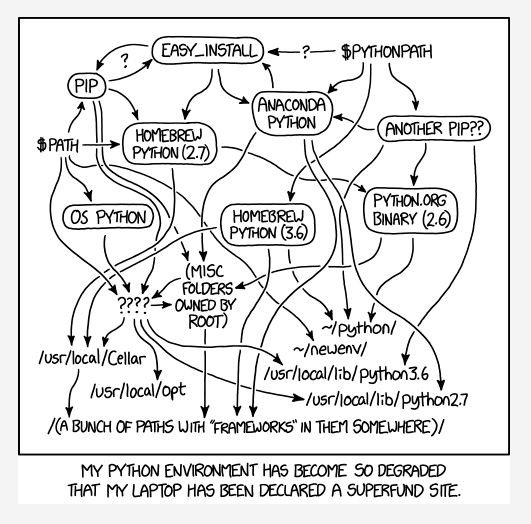 Set Python 3 as default on Mac

The default Python version that ships with (older) Mac OS software is hilariously old. Because I am still developing on a mid-2014 MBP Retina (SUE ME!) I was... 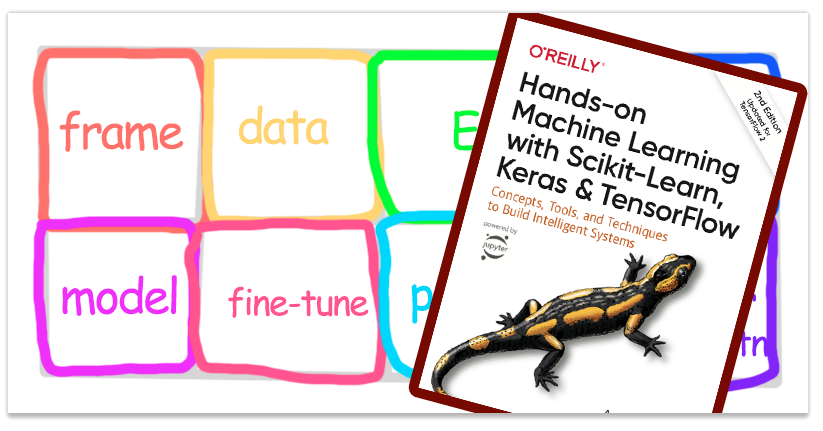 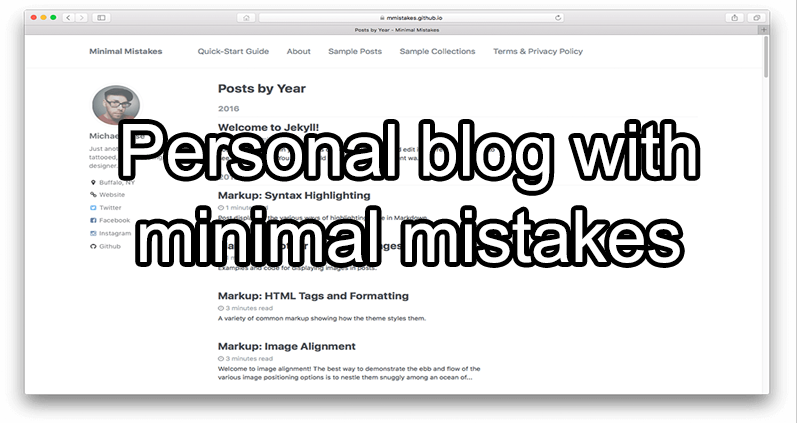 In this blog post I’ll show you how to change the size of your blog posts in the minimal mistakes theme.